With the Clock Running Out, Humans Need to Rethink Time Itself 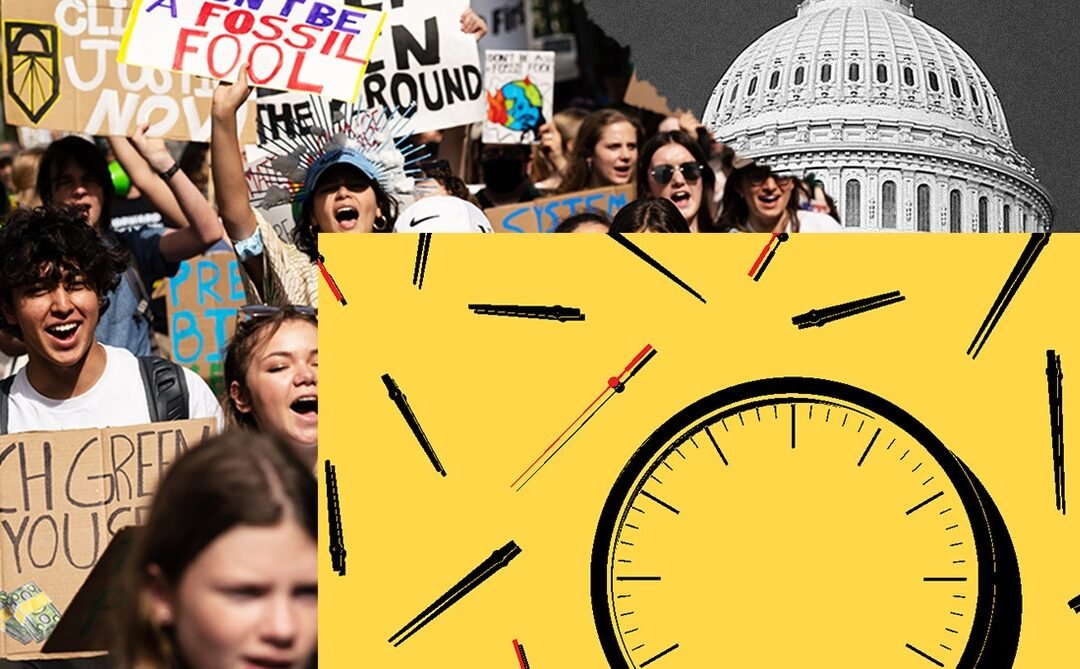 Another day, another deadline: To limit global warming to 1.5 degrees Celsius, greenhouse gas emissions must peak “at the latest before 2025,” according to the most recent Intergovernmental Panel on Climate Change report. This is how we live now—not in the Biblical end times, but in a permanent “time of the end,” in the words of 20th-century German Jewish philosopher Günther Anders. Between the possibility of nuclear war and the forward march of climate change, for at least 70 years a distinctly secular apocalypse has always seemed just around the corner. Time itself is one of the victims.

Just take a look around: The mega-droughts, wildfires, and category-busting hurricanes we see today are the result of emissions past—a hauntological quirk of the carbon cycle. The acute stress of the Covid-19 pandemic slowed time for some, while for others things sped up—both natural responses, psychologists say, to the immense stress of lockdown. News of the war in Ukraine, which once might have arrived in a morning paper or nightly program, is transmitted through our screens 24/7. And TikTok trends move at the speed of a micro-video, pulling fast fashion and even fast furniture along with it. Everywhere, the past, present, and future appear to be collapsing into each other.

Speed has been the name of the game since the Industrial Revolution, according to the German political scientist Hartmut Rosa, author of Social Acceleration: A New Theory of Modernity. For centuries, Westerners have bought into the narrative that “we can overcome material scarcity through economic growth, scarcity of time through faster technologies, and a better, free life through changes in science and politics,” he said in 2015. People are pushed to pack in more labor, more consumption, more everything. Yet the more we cram, the less those experiences register in our minds and memories, leading to a profound sense of alienation.

Now, time is not only accelerating; for many, the future also feels foreclosed. In a 2021 survey of more than 10,000 young people in 10 countries, more than half agreed that “humanity is doomed” and many described the sense that they have no future. Individualized “eco-anxiety” and “climate grief,” while real and potent, are not the only consequences of this change in tempo. It’s modern liberal democracy that is struggling to keep a hold on its authority and imagine a future for everyone. What citizens do with their changed relationship to time is sure to have profound effects for governments around the globe.

Conceptions of time have changed dramatically across human history, from cyclical to linear, religious to secular. But “scientific” time, based on a traditional Newtonian conception of time’s arrow moving forward at a regimented speed, is the timepiece of modernity, of capitalism, and of liberal democracy. While more recent physics research has challenged this premise, “clock time” is still used to structure our electoral cycles, prison sentences, immigration policies, and more, says political philosopher Elizabeth Cohen, author of The Political Value of Time. In this context, time is not an inert substance, but the very soil from which democracy springs.

Many wealthy countries, however, are increasingly post-clock. Instead, people’s day-to-day lives operate on “network time,” says Robert Hassan, a professor of media and communication at the University of Melbourne and author of Empires of Speed. Since the 1960s, networked computing, which makes everything from social media to Zoom calls possible, has allowed for a kind of connectivity that collapses both space and time. The result is that democratic politics seems interminably slow relative to the pace of commerce and culture, and people’s dual identities as citizens and consumers feel more and more at odds.

The itch to press fast-forward on politics may be one reason 40 percent of Americans—54 percent of the Republicans surveyed and 31 percent of Democrats—say they would support a military coup in a hypothetical scenario where “there is a lot of corruption” in government. Other models of governance, from illiberal democracy to fascism, can act much more decisively, which holds obvious appeal in our deadlined moment. “Only an enlightened despot could push through the measures needed to navigate the 21st century safely,” British astronomer Martin Rees has written. Younger people feel it, too: One of environmental science professor Sarah Jaquette Ray’s students “emailed me to say she was so distressed that she’d be willing to submit to a green dictator if they would address climate change,” Ray wrote in Scientific American last year.

But good decision-making—the kind democracy intends to elicit—takes time. A lot of it. Bills must be read, ideally in full, and debated. Citizens deserve time between elections to reflect on the future they want. Politicians should be afforded patience as they try to enact their campaign promises. And history shows us despots are rarely enlightened. While authoritarian environmentalism “may excel at producing policies, [it appears to] be no better than democratic environmentalism at producing good outcomes,” according to The Economist. In China, for example, the Communist Party’s “policy output has been prolific,” yet its actions are inconsistent with its stated goals. As of 2021, the country is constructing coal plants in 60 new locations to avoid power shortages; if used as intended, the plants will remain active into the 2050s.