What Black One Direction Fans Reveal About Activism 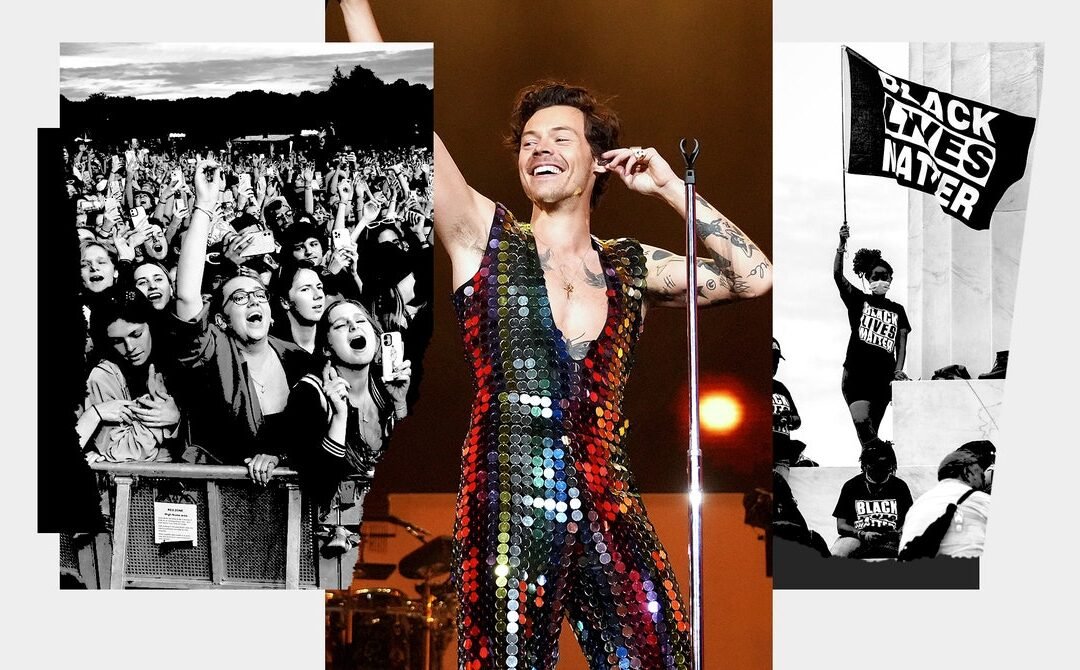 Gabrielle Foster had been a fan of One Direction since she was 11 years old.

“We all come from different backgrounds. We all bond over Harry, but we don’t personally know what’s going on in each other’s lives,” she told me. “I just want there to be more representation for everybody.” Now in her early twenties, Foster is one of the better-known “Black Harries” on Twitter, as she was one of the first Black Harry Styles fans to organize efforts to win his public alliance with the Black Lives Matter movement.

This took a longer time than many people seem to remember. In the fall of 2017, a fan threw a Black Lives Matter flag onto the stage at a Styles concert in London, and Styles ignored it. His fan base was used to him accepting pride flags and dancing with them onstage, as well as giving an opening monologue about how much he valued the support of women. It didn’t seem like an accident that he’d left the flag on the floor, untouched, even as sections of the crowd were holding up Black Lives Matter signs. He was known for noticing things like that—he would often read off the signs in the audience and banter a bit with the people who had written odd ones. Many fans responded with anger. “Use your fucking platform,” one tweeted afterward. “You’re enabling hypocrisy.” Others were deeply hurt. “I love Harry, he’s my safest place, but I feel so disconnected, so unsupported,” another wrote. Some taunted him with a play on his own song lyrics, from the (horrible) song “Woman”: “You flower, you feast” became “You flower, you white feministe.”

Young people who were raised to understand network effects speak reflexively about the power that comes with having a lot of followers and a central cultural position, or a platform, which is not so much a stable object or trait but a privilege granted by interconnected groups of real people and should therefore be used judiciously. Black fans of Harry Styles were not arguing that he should support Black Lives Matter only because it would be personally affirming; they saw it as his moral responsibility as a person with a high public profile. But many white fans joined in the conversation only to suggest that Black fans were asking for too much, that Harry couldn’t support every political cause, and that a concert was not a protest. After the initial uproar, Styles posted a black-and-white photograph of some of the signs on his Instagram, captioned “Love.” To white fans, that gesture was supposed to be enough. In June 2018, when Gabrielle organized a huge showing of mass-printed paper signs at a show in Hershey, Pennsylvania, white fans tweeted at her about it in rude confusion. This was resolved already, wasn’t it?

“The projects we put on all through the tour, it started to feel hopeless at some point,” she told me. “It was a constant attack toward Black fans; we’re getting attacked and we can’t get the recognition from Harry.” Gabrielle went to a second concert, in Washington, DC, and splurged for a ticket in the standing-room pit at the edge of the stage. She brought a Black Lives Matter flag with her and planned to toss it up to Styles, to see if he would pick it up. “I was very hopeful,” she told me. “He was directly in front of me and he was talking to someone near me. I threw it at his feet, and he looked down at it, accidentally stepped on it, and walked away. So that kind of crushed me.” Her mood got worse when some of the girls in the crowd around her insisted that she had only herself to blame for the disappointment. She’d kept the flag crumpled up so he couldn’t see it the whole show, they told her, and then she got mad at him for not noticing it that one instant? She shot back that she’d held the flag open over the edge of the barricade for hours. The night was ruined, and she went home in a rage. “I was really upset in the moment,” she said. “I had a picture of him standing on the flag and I was so mad. I had even considered just unstanning completely because it was so awful. I went off the rails.”

After a long drive back to Virginia, she cooled down a bit and checked her Twitter messages. Many of her friends in Styles fandom had sent her clips of another Black Lives Matter flag on the Jumbotron at a different show, or of Styles holding the flag up in Boston, and one of him yelling, “I love every single one of you. If you are Black, if you are white . . . Whoever you are . . . I support you.” Eventually, she decided that Styles did care. But she never quite forgot that moment of despair. “I wish he had done something sooner,” she told me. “It still gets thrown in Black fans’ faces to this day by other fandoms. Well, your fave wouldn’t even hold the flag, or something like that.”

There is a term for the type of fan who will never criticize their fave, never hold them accountable for anything, and coddle them forever as if each day is freshly the day they were born. It’s “cupcake,” and the Harry Styles fandom has many of them. It also has what Black fans refer to as “KKK Harries”—white fans who refuse to cede any ground in the fandom and prefer to pretend they’re the only people there.