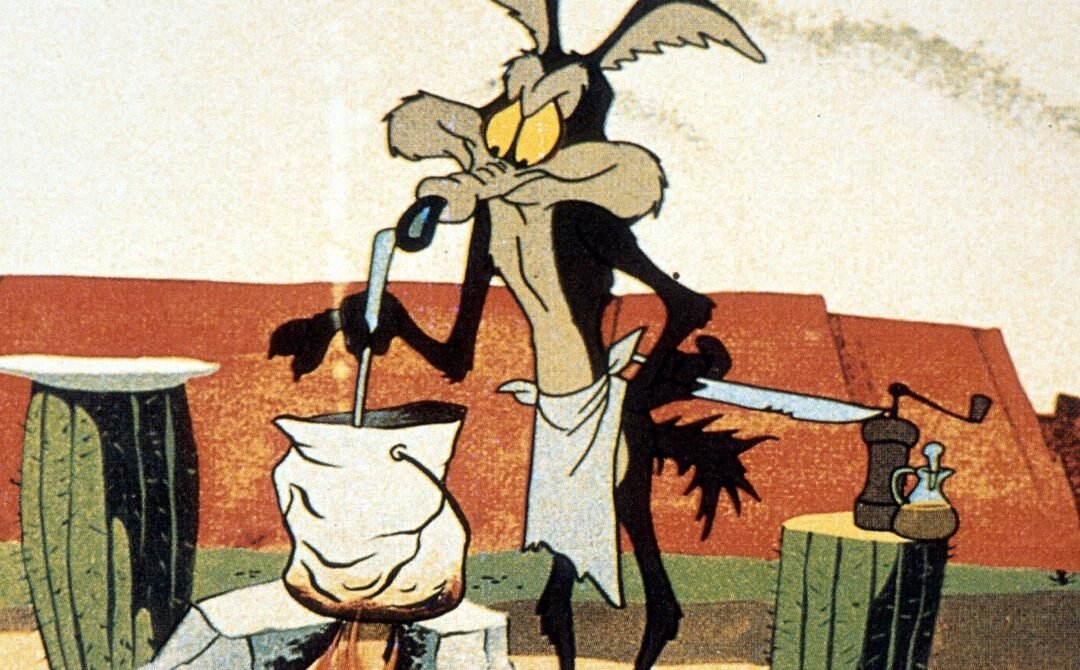 I like to analyze the physics of science fiction, and so I’m going to argue that the Merrie Melodies cartoon “Compressed Hare” takes place in the far future when animals rule the world. I mean, Bugs Bunny and Wile E. Coyote walk on two legs, talk, and build stuff. How would that not be science fiction?

Let me set the scene—and I don’t think we have to worry about spoiler alerts since this episode is 60 years old. The basic idea is, of course, that Wile E. Coyote has decided he should eat the rabbit. After a couple of failed attempts to capture Bugs, he comes up with a new plan. First, he’s going to drop a carrot-shaped piece of iron into Bugs’ rabbit hole. After the carrot is consumed (and I have no idea how that would happen), Wile E. Coyote will turn on a giant electromagnet and pull the rabbit right to him. It’s such a simple and awesome plan, it just has to work, right?

But wait! Here’s the part that I really like: While Wile E. Coyote is assembling his contraption, we see that it comes in a huge crate labeled “One 10,000,000,000 Volt Electric Magnet Do It Yourself Kit.”

In the end, you can probably guess what happens: Bugs doesn’t actually eat the iron carrot, so once the coyote turns on the magnet, it just goes zooming toward him and into his cave. And of course a bunch of other stuff gets attracted to it, too—including a lamppost, a bulldozer, a giant cruise ship, and a rocket.

OK, let’s break down the physics of this massive electromagnet and see if this would have worked if Bugs had fallen for it.

What Is an Electromagnet?

There are essentially two ways to make a constant magnetic field. The first is with a permanent magnet, like those things that stick to your refrigerator door. These are made of some type of ferromagnetic material like iron, nickel, alnico, or neodymium. A ferromagnetic material basically contains regions that act like individual magnets, each with a north and south pole. If all these magnetic domains are aligned, the material will act like a magnet. (There’s some very complicated stuff going on at the atomic level, but let’s not worry about that right now.)

When the electric current makes a magnetic field, this field then interacts with the magnetic domains in the piece of iron. Now that iron also acts like a magnet—the result is the electromagnet and the induced magnet attract each other.

What About 10 Billion Volts?

I don’t know how the script for this episode came about, but in my mind they had a group of writers working together. Perhaps someone came up with the idea of an electromagnet and an iron carrot and everyone agreed to put that in there. Surely someone raised their hand and said, “You know, we can’t just do an electromagnet. It has to be over-the-top big.” Another writer must have replied, “Let’s put a number there. What about 1 million volts?” Someone else interjected: “Sure, 1 million volts is cool—but what about 10 billion volts?”

What does 10 billion volts even mean for an electromagnet? Remember, the most important thing about an electromagnet is the electric current (in amps), not the voltage (in volts). To make a connection between voltage and current, we need to know the resistance. Resistance is a property that tells you how difficult it is to move electric charges through a wire, and it’s measured in ohms. If we know the resistance of the electromagnet wire, then we can use Ohm’s law to find the current. As an equation, it looks like this: