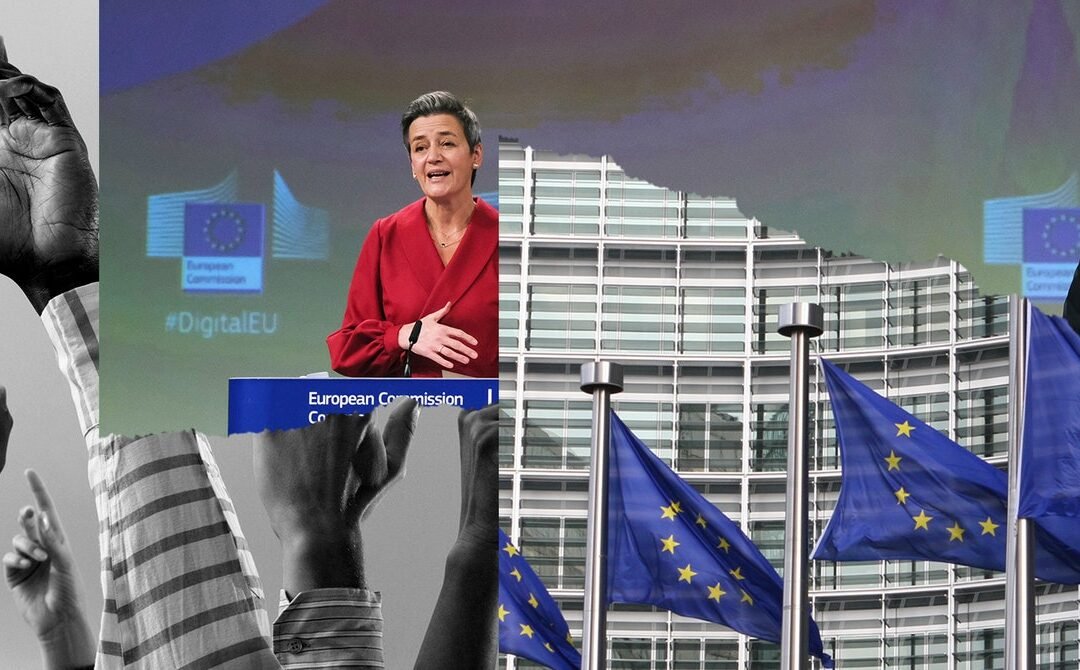 As the dust settles from last weekend’s frenzied EU negotiations on the Digital Service Act (DSA), the “new constitution for the internet,” it remains to be seen whether human rights champions, democracy defenders, and free expression advocates should be celebrating this milestone.

The DSA offers a unique opportunity for Europe to set the global standard for online content governance. The legislation’s ambitious provisions—such as increased algorithmic and content moderation transparency, extensive due diligence obligations, and risk assessment and mitigation measures—promise to establish a holistic and comprehensive legal framework that addresses many of the challenges in the digital ecosystem and provides clearer obligations on the handling of illegal content.

So why are civil society groups not roundly celebrating the announcement of the provisional political agreement? For one thing, the final text of the DSA isn’t ready yet and won’t be for several weeks, as many elements still need to be fine-tuned in what are known as technical meetings. What’s more, experts and advocates are not entirely sure what surprises lie in this provisional agreement. This uncertainty speaks to broader concerns about the distinct lack of transparency during the inter-institutions negotiations—arguably the most crucial stage of the legislative process, where the final text of the regulation comes to life.

Broadly speaking, a lack of inclusivity, democratic transparency, and equitable participation has long been a point of contention in EU policy-making. Given the ongoing exclusion of voices and perspectives from marginalized groups and absence of intersectional methodology, the opacity of this stage of the DSA process was sadly unsurprising. The result is that well-intentioned legislation fails to provide adequate protections for those most negatively impacted by the issues its frameworks aim to address.

These types of negotiations are a standard part of the EU’s co-legislative process. Once the European Commission has presented a draft for any proposed legislation, the European Council and European Parliament spend a significant amount of time scrutinizing, amending, re-scrutinizing, and re-amending it. This results in the development of their mandates—versions of the text that they will go into the negotiations with. The European Parliament’s 705 members can vote to approve or reject the House’s proposal, which forms the basis for what the lead negotiators will fight for as the process moves forward. Similarly, the European Council undergoes an extensive process in which member states can put forward proposals for amendments as compromises are made and agreement is reached for their “general approach.”

Civil society groups and experts can be extremely active and directly engaged during this period. In the context of the DSA, outside voices successfully fought to include measures that protect democratic and fundamental rights. This stage offers a key opportunity for democratic participation in the EU, and advocates and human rights experts work tirelessly to ensure the text that makes it to the negotiating table is as progressive and rights-protecting as possible. However, once the democratic part of the process concludes, a more opaque stage called the inter-institutional negotiations, or Trilogues, begins. In this portion of the DSA negotiations, several worrying provisions were introduced and existing provisions dramatically amended, with the final result diverging from democratically agreed-upon mandates.

Advocates faced these same challenges with the EU’s Regulation on Preventing the Dissemination of Terrorist Content Online and the GDPR, both of which fell short.

Once the Trilogues commence, anyone who is not in the room has to navigate a fast-moving and opaque process and rely on innovative methods and ally networks to ascertain how negotiations are developing and what compromises are on the table. These elements change so rapidly that it becomes a challenge to keep up, and it can be easy to miss an opportunity to improve a provision. Advocates faced these same challenges in the development of the EU’s Regulation on Preventing the Dissemination of Terrorist Content Online and the GDPR, both of which unfortunately fell short, with the terrorist regulation lacking adequate fundamental rights safeguards and the GDPR failing on the enforcement side.

The most significant example of a provision hastily introduced into the DSA during Trilogues was the “Crisis Response Mechanism,” which would have endowed the European Commission with the unilateral power to declare a state of emergency across the Union and require platforms to take mitigating actions. In light of the pandemic and war in Ukraine, it’s understandable that legislators would take the opportunity to add measures to alleviate future crises. But such measures simply cannot come at the expense of obligations under the founding treaties to uphold the Rule of Law, especially as the European Court of Justice has only just dismissed the complaints of two member states in relation to Rule of Law violations.

Increasing government power to potentially suppress speech and make sweeping decisions without democratic checks and balances—something the crisis response mechanism would have enabled—is a red line that should not be crossed. Luckily, and thanks in huge part to coordinated advocacy efforts of civil society organizations, important safeguards were embedded into the provision, and unilateral power was not granted to the European Commission. But the provision was still introduced and negotiated outside the mandates of the co-legislators, which calls into question its democratic legitimacy. And it may still prove problematic; we simply won’t know until the final text is published.