The Best Way to Learn Online? Be a Lurker 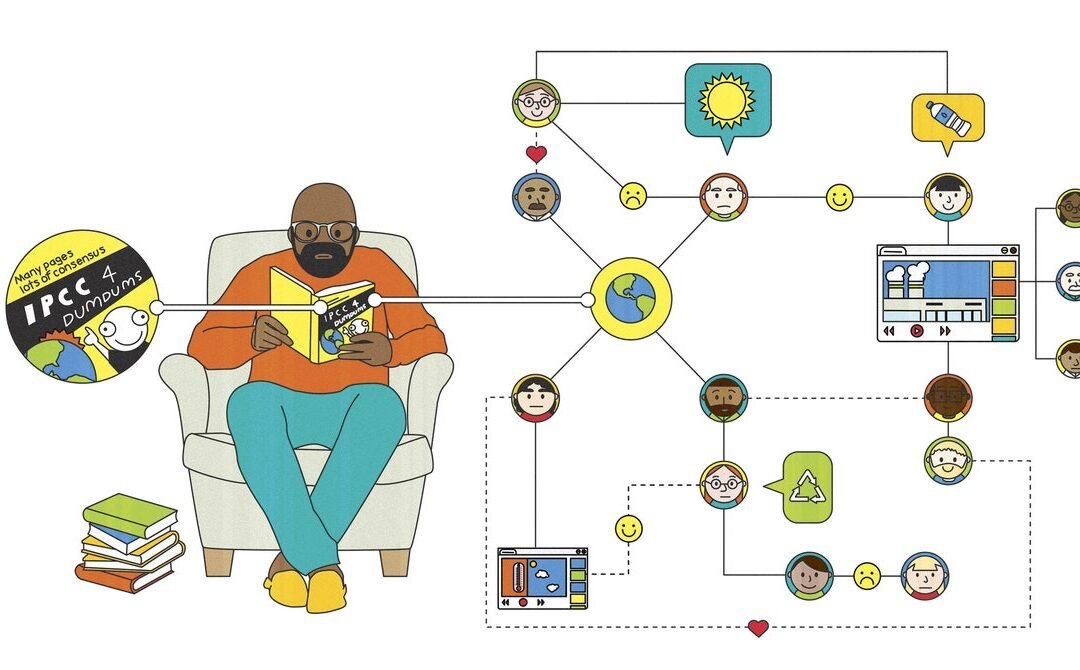 Lately I have been trying to get through the UN Intergovernmental Panel on Climate Change’s big report, the one that came out late last year, called “Climate Change 2021: The Physical Science Basis.” It’s a challenge because (a) I must, um, learn as I go, and (b) the PDF is nearly 4,000 pages of aggregated, footnoted, illustrated scientific consensus about weather. That’s too much consensus; everyone agrees. Yet obviously they—the hundreds of IPCC-affiliated scientists who compiled this behemoth—want us to read it, right? The thing exists, so I should at least try. Plus it’s free to download. I love a bargain.

However, the gigantic PDF broke my e-reader. In time I got it to work, but the font was too small. So I used a command-line program called mutool to split each page in half, and now I can read the book in landscape mode with bigger type, a little hack of which I am embarrassingly proud—although the resulting document is nearly 8,000 pages long.

Eight kilopages is a lot, but a very long book is still a book: You start at the beginning, skip the intro pages, skim over the “Summary for Policymakers,” jump forward 7,000 pages or so and read a little from “Annex V: Monsoons.” OK, so maybe it’s not really a book, more of a database that results from a complicated bureaucratic process. I make it a few pages at a time, until my brain refuses to go any further without a Twitter break.

Frustrated by my slow progress, I started to use Twitter to look up the climate scientists themselves, click through their timelines. It’s a good way to see what they’re about—to pick up social signals that might bring the rest of their network into better focus. As you’d expect from a group of extremely smart literal cloud people, they aren’t exactly dank memelord true posters. Some speak in press releases; some like to share science news. Yet personal details always leak out—kids and spouses and the like. You see their little avatar faces, come across some artifact like a Spotify playlist, witness their naked enthusiasm for glaciers. Reading through this stuff, I definitely feel like I’m creeping.

I think this sort of filthy spyhood—peepreading—is a particularly internettish way of learning. Like when you wake up and all the social media posts circulating in your peer group are suddenly about a thing, but you don’t know what the thing is. Most of the time the tweets are elliptical, like “Couldn’t happen to a nicer columnist” or “Just shows you what actually goes on in the mineralogy community.” In fact, the vaguer they are, the more likely the thing is to be really bad and/or salacious. So now you have to—no higher priority—blow up your morning and use context clues to unpack the scandal, poking around the network, seeing who liked what, pasting tweets into your group chats to see if anyone has any insight, until you find out who has been called out for what by a now-locked account, with the end result being, of course, that you do figure it out, some squalid nasty thing someone said or did, and, welp, you can go about your day and wait for the story to show up in an essay about cancel culture.

Being a sneakbrowser is just who I am. I’d rather spy for a year than ask a direct question.

I’m not proud of this. I just do it. Sometimes it’s the only way to learn about subcultures and communities. When you’re researching software history, which is something I like to do, you have to venture into copyright-dubious Discords and peculiar archive-focused websites and lurk around until you find out how to get the good stuff. You have to page through a bunch of gossip, drama, fights over whether emulating old computers in software is “real” or not. And if you lurk long enough, read enough forum threads, someone will post a temporary link to the special Google doc filled with links to confusingly titled zip files. The internet turns the world into a puzzle you must solve to feel safe. It’s scary, of course, but when you solve the puzzle you feel an unbelievable sense of control. (This is also, alas, how you get QAnon.)

But being a sneakbrowser is also just who I am. Owing to cowardice, extraordinary shyness, or perhaps toxic masculinity (choose whichever works for you), I’d rather spy for a year than ask a direct question. This is an unfortunate quality in a journalist. The job of a journalist is to call smart people and ask them to explain things. Those people have to talk to you because it helps their careers. I find that I always slightly misunderstand what they tell me; I get the tone wrong, and then they send corrective emails that pulp my soul. I do better looking at the artifacts of a civilization than participating in it. Twitter, newsletters, Slacks, Discords: Lurking is learning.

So give me a network and the tools to read it. Give me the textbook called Web Markup Languages Produced in Anger, the anthology of GitHub messages called You Can’t Program in Lisp Because You’re an Idiot, the climate report called “Energy-Systems People and Earth-Systems People: The Longest Thread.”