Astrophysicists Release the Biggest Map of the Universe Yet 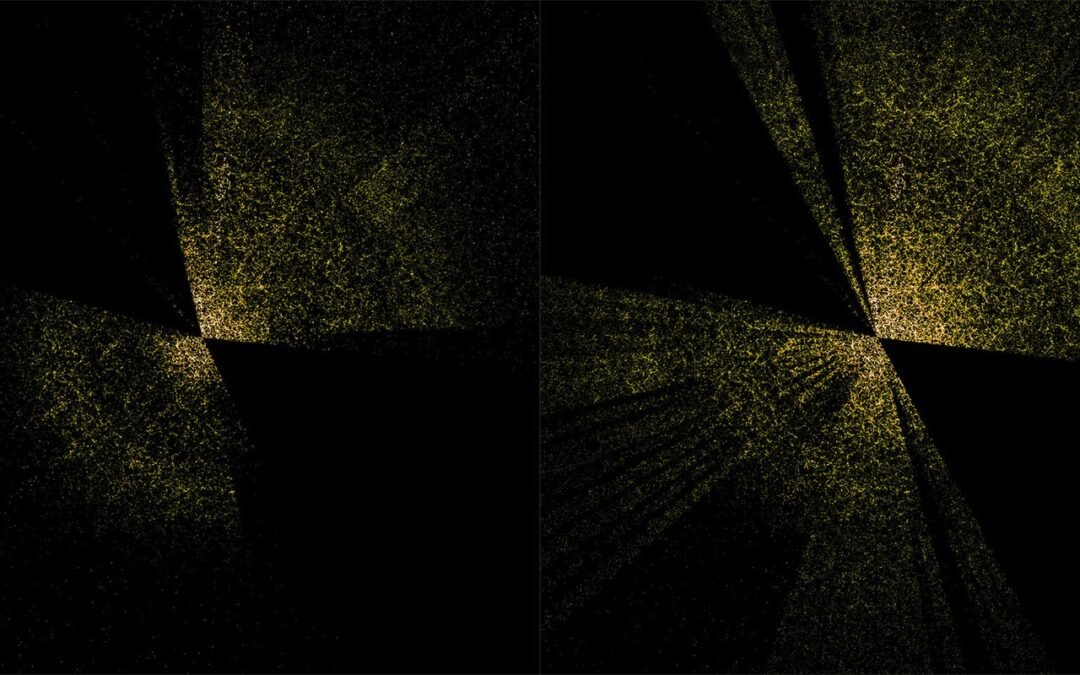 After just seven months, a huge team of scientists who work with the Dark Energy Spectroscopic Instrument have already mapped a larger swath of the cosmos than all other 3D surveys combined. And since they’re only 10 percent of the way through their five-year mission, there’s much more to come.

DESI, pronounced like Desi Arnaz’s name, has revealed a spectacular cosmic web of more than 7.5 million galaxies, and it will scan up to 40 million. The instrument is funded by the US Department of Energy and installed at the Nicholas U. Mayall 4-meter Telescope at Kitt Peak National Observatory near Tucson, Arizona. It measures the precise distances of galaxies from Earth and their emitted light at a range of wavelengths, achieving quantity and quality at the same time. It will eventually cover some 14,000 square degrees, about one third of the sky. The science gained from parsing the data is yet to come, but it will especially aid astrophysicists as they investigate how the universe is expanding.

“It’s really a fantastic adventure. We have been able to go on despite the pandemic. We had to shut down for a few months and then we adapted,” says Julien Guy, DESI project scientist at the Lawrence Berkeley National Laboratory, the collaboration’s lead institution. Now the observations and data processing are mostly automated; every morning the scientists get data on as many as 100,000 galaxies collected overnight, he says.

“It’s amazing how well this instrument is working and how well it’s been designed to go out and get the distances to these galaxies. It’s an incredibly efficient machine for harvesting them in a way that even two decades ago would’ve been mind-boggling,” says Jason Rhodes, a research scientist at the Jet Propulsion Laboratory in Pasadena who’s working on space telescopes to map out galaxies in the early universe.

DESI actually consists of several apparatuses installed within the telescope’s 14-story dome. The circular focal plane is positioned near the top, and it’s made up of 10 wedge-shaped petals, each with 500 tiny robots. They’re what enable the instrument’s galactic cartography: These 5,000 pencil-sized robotic motors position optical fibers that have to be accurately placed to within 10 microns–less than the thickness of a human hair. That enables the instrument to collect precise data on 5,000 galaxies at once. Then the telescope points at another area of the night sky and starts work on the next 5,000. In contrast, at one of DESI’s predecessors, the Sloan Digital Sky Survey, based at a telescope in southern New Mexico, scientists had to manually drill holes into a circular aluminum plate at the telescope’s focus for each set of measurements, and they plugged in little fibers for every single galaxy they wanted to observe.